When training students (senpai and kohai) in traditional martial arts, most instructors (sensei) hope they learn humility, self-respect, respect for others, along with powerful self-defense techniques (waza) while benefiting from muscle memory known as mushin, meditation, and physical and mental exercises that traditional martial arts provide. A good sensei of a traditional martial arts school becomes a head of a family of the martial arts students, has concerns about each student, and prays each will carry their lessons in a positive and respectful manner for the rest of their lives. And the sensei hopes each student will keep in contact and update their sensei in their life endeavors.
Disappointment (just like an aunt or uncle) fills the mind of a sensei, when students move on and are are not heard from again. But those that keep in touch, a traditional sensei rejoices in their life accomplishments. This relationship is not as profound in the sport martial arts, where students and teachers do not form close bonds. It is more like relationships well-portrayed between Miyagi-san and Daniel san vs the Cobra Kai thugs in the 1984 Karate Kid. In traditional martial arts schools, it is expected students keep in touch with their sensei, no matter where they move to, or what they do. In sport martial arts, often the student is ostracized when they move on to another place or another dojo.

It is competition that mainly sets traditional martial arts apart from sport arts, but as with anything that is similar, there are no definite boundaries to easily define "traditional" vs. "sport" martial arts anymore. A gradation began to blur the difference in about 1964, when most judo became an olympic sport. Today, one can differentiate the extreme end-point martial arts from one another, but there is now everything in between.

Martial arts are not associated with any particular religion, although one can see influence of Buddhism and even Shinto in a dojo (karate school). And in some areas of North and South America and Europe, one can now see evidence of the influence of Christianity on martial arts or vise versa, particularly where churches include martial arts as a unique ministry to attract members. But, just like any type of discipline, there are those who argue against teaching martial arts to church members, because they feel mediation, or imagined mystic qualities, make martial arts antipathetic to Christianity. Personally, I feel most of these people have little understanding of traditional martial arts, and it is likely they once observed or trained in sport martial art, watched too many movies, or have little to no expertise in traditional martial arts and speak with lack of understanding. But, each individual must decide for themselves. And so, what is the difference between teaching martial arts to church members, or teaching tennis to church members - in most situations, there is no difference - it depends on the individual and the teacher.

There is no end to learning in the martial arts. Thus, the more one trains in martial art, the more one begins to see various applications of kata and technique. Karate employs forms know as kata. The more a person trains in kata, the more they begin to understand the hidden techniques that were unknown to them during their previous year of training. Kata also teaches proper breathing, movement, balance and with the assistance of a qualified instructor, it will teach speed, power and focus. After the movements in a kata are mastered, each part can be broken down into bunkai (self-defense applications) and each part can have many different applications that include the obvious, the not so obvious, and then the hidden. It takes understanding and creativity to truly master bunkai, because one must learn to react without thinking, react with lightning fast speed, learn to react with maximum power, remain in balance, have proper distance, and understand the many different modifications.

As students progress and understand kata imi (the meaning of kata) they progressively are taught other kuden (secrets) of martial arts that include hitotsuki hitogeri (one strike knock downs), kote kitae (extreme body hardening) and trusted students may be taught okurasu goroshi (dim mak). Thus one of the primary differences in traditional vs. sport martial arts is the focus on the understanding of kata and how to use this understanding in self-defense.

But, when it comes down to employing traditional karate in a self-defense situation - whether it is the defense of oneself, or of another, women can defend as effectively as any man - but they must train hard in a dojo. Traditional martial arts can lead one to peace of mind and even to a path of peace.

Should women train in Karate and other Martial Arts? What kind of question is this?

According to Grandmaster Hausel, world head of Seiyo no Shorin-Ryu Karate, many of his toughest karate and jujutsu students over the decades have been women. Take for instance Katie (see photo near bottom entitled 'Katie works over Kris'). Katie enjoyed choking & applying joint locks to all of the macho guys in jujutsu classes at the University of Wyoming. According to Professor Hausel, she gave them a feminine smile before taking her partner to a tolerance limit in pain. We even had a few burly guys quit jujutsu to avoid her.

But there was a fairly tale ending for this black belt martial artist. Katie ended up marrying Kris (the guy she was beating up in the photo at the University of Wyoming). After graduating from college and both earning black belts in Shorin-Ryu Karate and Kobudo, the two moved to Cody, and later to Casper Wyoming where they are now raising a family. Over the years, we had many students end up marrying one another - and no, we were not running a dating service - it was just a great way for students to socialize and learn to defend themselves.

Then there was Sensei Gillespie. Donette loved to punch. In one demonstration she kicked Soke Hausel in the ribs with a karate kick at half time at a university basketball game with a thump that echoed throughout the arena. Few people could believe the power she had in her kick. Then she kicked him in the groin (unprotected) and lifted him up onto his toes with another loud whomp! It brought the crowd to their feet with cheers!

In addition to power & focus of karate, there is also beauty in karate. In karate, there are kata (forms) that contain history, tradition, training technique, self-defense, jujutsu throws, timing, balance, strength, power, Zen and more. Kata are like traditional Okinawan dances and require balance, timing, strength and more.

So, should women be in Karate Classes? The answer is a definite YES! In fact, no woman (or school teacher) should be without karate or self-defense training in this day and age. It will not only help maintain body weight, but it is also healthy and provides people with the best tools for self-defense. 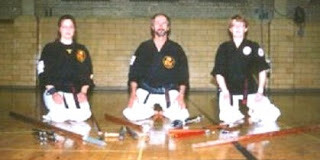 Posted by Soke Hausel at 6:56 PM No comments:

Martial arts taught at the Arizona Hombu are traditional, thus students should expect to learn lots of ceremony & considerable power. 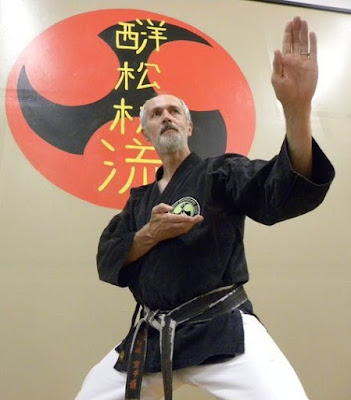 Over the years, he taught karate karate, kobudo, jujutsu, self-defense, women's self-defense and samurai arts. Many martial arts classes at the University of Wyoming filled with more than 100 students with waiting lists of hopefuls. But today, he  has now chosen to limit the number of students in his classes at the Arizona School of Traditional Karate that is also known as the Arizona Hombu dojo.

The style of karate is Okinawan Shorin-Ryu. Basically one of the original forms of karate developed centuries ago on Okinawa. Soke Hausel's love for Karate is seen in the many national & international awards presented by several martial arts associations and martial arts Halls of Fame.

Martial arts training for Adults and Families & members of Seiyo No Shorin-Ryu Karate Kobudo Kai is available each week at the Arizona School of Traditional Karate near the corner of Mesa, Gilbert & Chandler in the East Valley of Phoenix  (60 W. Baseline Road, Mesa). Drive east on baseline from Country Club Road and turn left at the second traffic light. You will see the Arizona Martial Arts school immediately to your right (NE corner of MacDonald).
﻿﻿

Posted by Soke Hausel at 5:33 PM No comments:

View of Hombu outside. The inside of the martial arts school exhibits typical Japanesetradition. Martial arts taught at the Arizona ... 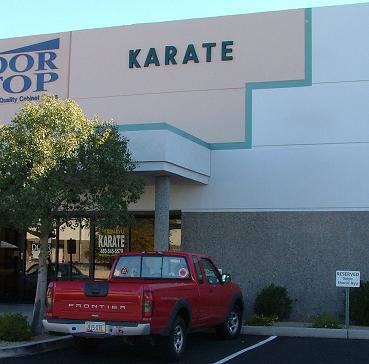